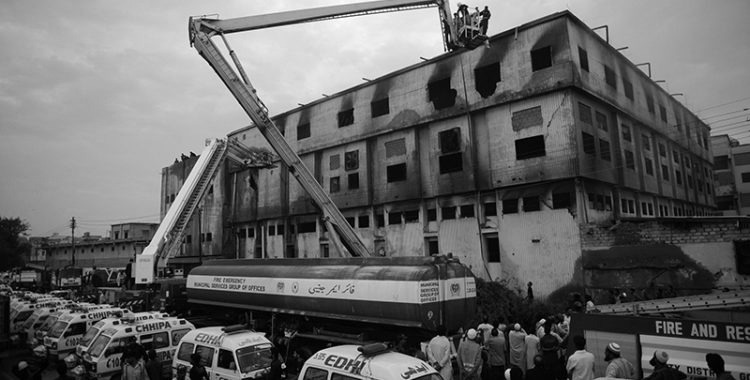 Constitutional Petition was filed before the Honourable High Court of Sindh at Karachi as a result of one of the biggest industrial accident in Pakistan’s history caused by a fire, which erupted inside Ali Enterprises in Baldia Town Karachi, resulting in the death of 255 workers whilst causing injuries to 55 workers. The death toll rose to such a high number because the factory did not meet any fire safety requirements. Further, it was revealed that it was common practice amongst the factory management to lock all exits from the outside during work hours

By filing the said Petition, PILER and other organizations and individuals had sought directions for inter alia, judicial inquiry, compensation, enforcement of labour laws, and lodging of criminal case against the factory owners. It was due to vigorous efforts of PILER, KiK Textilien, a German based company that was the major buyer of the products made in the aforementioned factory, entered into an agreement with PILER on 21.12.2012 and paid immediate relief compensation of USD1 Million to the affected workers and families.

Accordingly, on PILER’s request, the Honourable Sindh High Court, through Orders passed on 29.01.2013 in the said Petition, formed a Commission, headed by a former Supreme Court Judge, to distribute the compensation paid by the KIK Textilien to the victims and their heirs. In addition to the above, compensation received from philanthropists, and Government organizations such as Commissioner Karachi, EOBI, SESSIand etc. has also been distributed amongst the legal heirs of the victims of Baldia Factory Fire incident. Therefore, the success of the Petition lies in the fact that through the said Petition, short-term and medium-term compensation for all the families was obtained which amounted to US$18,000 for each of the victim’s families.

The said Petition was disposed of through Order dated: 16-03-2016 when the Honourable High Court of Sindh observed and recorded that the legal heirs of all the victims have been paid monetary compensation for the losses suffered by them due to the aforementioned tragedy.

On 08.09.2016, KIK Textilien entered into an agreement for long term compensation for the legal heirs of the victims of the aforementioned Baldia Factory Fire tragedy, which was a landmark compensation arrangement whereby KiK Textilien agreed to pay an additional US$ 5.15 Million to fund loss of earnings, medical and allied care, rehabilitation cost to the injured survivors and dependents of those killed in the disaster. On 09.09.2016, the Arrangement for the settlement of the funding gap for the compensation to be delivered to the victims of the fire at the Ali Enterprises in Baldia was also reached between KIK Textilien, Clean Clothes Campaign, Industrial Global Union and ILO.

The Petition was filed before the Honourable High Court of Sindh the focus of which was the accountability of international inspection firms like RINA operating in Pakistan issuing SA 8000 certificates to even those factories that violated the provisions of factory laws, whilst demanding initiation of action against owners for lack of safety provisions.

In the said Petition, the act of the Investigation Officer was also challenged who removed murder charges from the FIR lodged against the owners of the aforementioned factory, allegedly at the behest of the then Prime Minister Raja Pervez Ashraf. The Petition also demanded that the PM should have no authority in the court proceedings of the case.

Subsequently, on 15.02.2013 the counsel for the respondent stated that it is the prerogative of the Trial Court alone to add or delete any section/charges from the challan. The Honourable High Court of Sindh,ordered that the Trial Court shall examine the supplementary report placed before it and decide the question on merits and strictly in accordance with law.

The Petition is pending adjudication before the Honourable High Court.