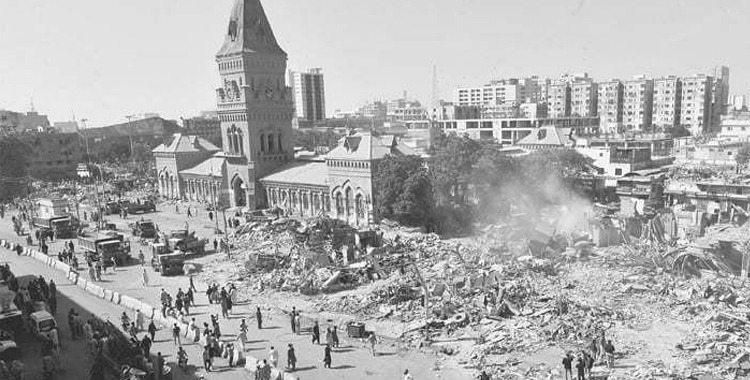 In the independent EIA produced when the KCR project had been commissioned to a Japanese company namely JICA, Chapter 7 clearly lays out a resettlement policy. This resettlement policy, although not comprehensive, was the result of multiple public hearings, an extensive survey and data analysis of the affected communities, in accordance with international standards and best practices. However, JICA is no longer handling the KCR Project and no resettlement policy is reported to be used. This is a regressive step backwards due to which 40,000 lives are likely to suffer. Moreover, this is in violation of the law and customary best practices and the Commissioner’s Office stands in non-compliance by not maintaining law and order, in letter and in spirit, as instructed by the Honourable Apex Court.A consensual statement between the Federal Government, the Sindh Government and the Mayor of Karachi, was submitted before this Court as C.M.A No. 243-K/2018, which attached complete list of affected commercial entities as its Annexure ‘A’. The said list names 11 markets and the total tally of demolished units, accordingly, is 3,575 units in Karachi’s District South. A proposed rehabilitation plan for 1,470 of the demolished units is also submitted by KMC. A note from the Mayor of Karachi to the Chief Minister of Sindh seeking resettlement of the displaced shopkeepers of the remaining 2,105 units in District South. Government of Sindh, pledged to accordingly resettle the displaced shopkeepers but neither the KMC in specific nor the Government of Sindh in general has finalized any resettlement policy or plan. In its Order dated 12.12.2018 the Honourable Supreme Court of Pakistan reiterated its directions that all demolitions in pursuance of its Orders must strictly be in accordance with the law.

In C.M.A No. 242-K/2018, the Additional Attorney General of Pakistan has submitted that an estimated 100,000 persons will be affected in residential settlements identified as encroached and/or illegally allotted land. However, the Sindh Katchi Abadi Authority’s list recognizes that 50, 605 households stand affected, and according to the Provisional Census Results the average household size is 6.5 persons per household. Even discounting the fact that population density tends to be higher in irregular settlements in urban areas, the projected numbers of affected persons is more than 328,933 persons.

In response to the identification of this problem, the Honorable Supreme Court of Pakistan has been pleased to direct, vide Para 2 of its Order dated 12.12.2018, according to agreement between Government of Sindh and Federal Government that no residential building will be demolished in pursuance of the Honorable Court’s earlier aforementioned Orders till further Orders and that six weeks’ notice will be provided for any such demolition. The Government of Sindh has pledged to provide resettlement to everyone made homeless through the present Anti-encroachment drive, however, no standard resettlement or compensation procedure has been identified as yet. The said inhabitants, including minors, women, the old and the infirm, live in constant fear of losing their homes, communities and family histories. Moreover, Karachi is a megacity that hires a vast amount of labor. 70% of its labor force lives in irregular settlements. They need to be rehabilitated in order for the city to continue functioning.

In pursuance of all the above-mentioned Orders, a total of 14,719 commercial units and 80 residential units had been demolished till 01.01.2019. All demolitions were made without the payment of compensation and/or a resettlement plan. According to the primary data collected by Petitioners including Petitioner Organizations namely Karachi Urban Lab (KUL) and Urban Resource Centre (URC), no market or residential place, except one, was given due written and timely notice or provided with a specific date of demolition. Most localities received notice via loudspeaker announcement a few days prior to the demolition and many were unable to remove the contents of their shops or hawkers before they were demolished.

The demolition process has been completely ad hoc and haphazard. Zoological Garden Market received a 30 day notice but Lee Market was only given a 3 day notice. A fact finding committee was allowed to be formed for Urdu Bazaar and adjacent markets, after demolition was announced and in the face of protest. No fact finding operation was afforded to any other market or residential area. Moreover, in some cases, the shop owners were not allowed to vacate their premises properly and suffered the additional loss of contents of their shops.

The foremost infirmity of the above described demolition proceedings is that almost all of the shopkeepers, hawkers and kiosk owners have either been paying rent on the property to KMC or have leased the property from KMC under the garb of legality, most often without any knowledge of the illegality of the documents provided to them by KMC. Many of these markets had been established decades ago, in the 1960s, 1970s or even earlier. Since shop owners had been allowed to operate their shops across generations and build communities around the markets, the presumption of legality solidified further.

In order to remedy this situation, we have filed an Intervenor Application before the Honourable Supreme Court of Pakistan.

This matter has been filed.