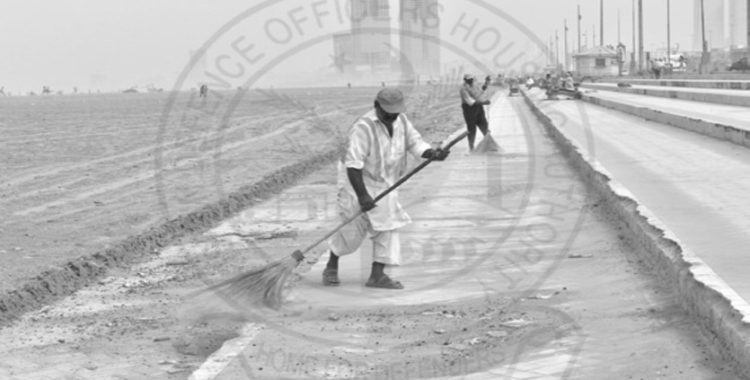 Clifton Board Cantonment (hereinafter ‘CBC’) is duty bound to provide essential services as to cleanliness and sanitation. This includes, but is not limited to, watering streets and other public places and cleaning streets, public places and drains abating nuisances and removing noxious vegetation. The CBC is governed by the Cantonment Act, 1924, and such Act requires the CBC to fulfil obligations regarding cleanliness and sanitation within the land under its purview. The said act explicitly envisages the hiring of essential services staff including but not limited to janitorial staff.

For this purpose, CBC employs a large janitorial staff which is hired through third party contractors. That in its decision dated Dec 08, 2017 in CP No. 409-K to 414-K of 2017, the Supreme Court of Pakistan has given a clear direction as to the key Constitutional Rights and Human Rights considerations that must be accounted for whilst engaging in third party contracts. However, CBC fails to ensure that minimum wage is paid to the said Janitorial staff. That the Sindh Minimum Wages Act, 2015, which was promulgated after the devolution of powers to the provinces through the 18th Constitutional Amendment, 2010, is applicable to the CBC and Sindh Government Notification No. L-11-13-3/2016 dated 1st July 2018 clearly sets out the minimum wage for unskilled workers at Rs. 16,200/- per month.

As a result of such cruel and discriminatory practices that ten percent of the wage earners in Pakistan are living below the poverty line, according to international studies. That the struggle for a living wage remains a distant goal when workers are struggling to obtain their rightful basic minimum wage.

In order to remedy this situation, a Constitutional Petition was filed in the Honourable High Court of Sindh, wherein the illegal and unconstitutional denial of basic minimum wage to the janitorial staff employed by the CBC was challenged. It sought the enforcement of the minimum wages for the CBC janitorial staff based on The Minimum Wages Ordinance, 1961 or the Sindh Minimum Wages Act, 2015. The Honourable High Court of Sindh, disposed off the Petition vide its Judgement, Dated 10/03/2021. It took on record the report submitted by the Chairman, Sindh Minimum Wages Board and the Chairman was directed to continue to submit periodical report to this Court for the implementation of the aforesaid laws for the betterment of janitorial staff of respondent-cantonments. Besides, the Honourable Court directed the respondents to implement the recommendations of the Chairman, Minimum Wages Board, Government of Sindh, under law.