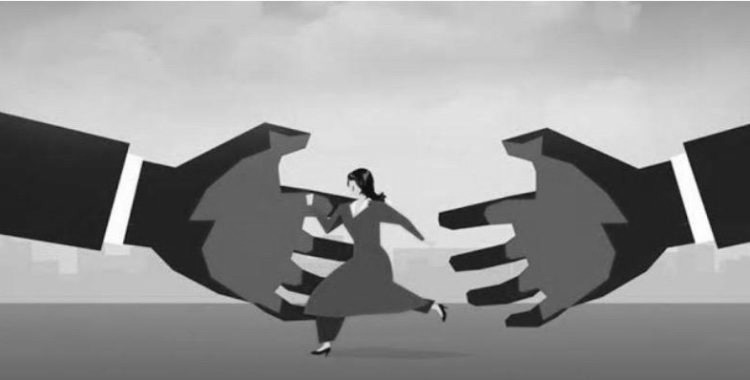 Sexual Harassment at the Workplace:

According to the UN Women, Sexual Harassment is “any unwelcome sexual advance, request for sexual favor, verbal or physical conduct or gesture of a sexual nature, or any other behaviour of a sexual nature that might reasonably be expected or be perceived to cause offence or humiliation to another, when such conduct interferes with work, is made a condition of employment or creates an intimidating, hostile or offensive work environment. While typically involving a pattern of behaviour, it can take the form of a single incident. Sexual harassment may occur between persons of the opposite or same sex. Both males and females can be either the victims or the offenders.”Sexual Harassment is a global problem and it is particularly insidious when prevalent at the workplace. One of the reasons that this issue is so severe and menacing because an unhealthy working environment will affect labor participation, i.e. it negatively impacts the ability of women and minorities to actively participate in the workforce and this has a negative impact on a country’s economy. Most importantly, it is against the fundamental right to non-discrimination and equality, and it undermines democratic participation. Moreover, a discriminatory work environment violates the right to safe and favorable working conditions. Women are more prone to facing this issue, and various instruments of International Law such as Convention on the Elimination of All Forms of Discrimination Against Women (CEDAW), 1979, have taken cognizance of and sought to address the issue.

Different countries have introduced laws to resolve and/or mitigate the menace of Sexual Harassment. The United Kingdom enacted the Sex Discrimination Act, 1975. India enacted the Sexual Harassment of Women at Workplace (Prevention, Prohibition and Redressal) Act, 2013. Sri Lanka defined and criminalized sexual harassment in the Penal Code Act No.2, 1883. South Africa first enacted. The Code of Good Practice, 1998. This Code was later amended on 4 August, 2005 by Amendments to the Code of Good Practice on the handling of Sexual Harassment cases in the workplace (General Notice 1357) and then the 2005 amended Code was re-enacted in 2018. Moreover, the Indian Supreme Court, in the Vishaka’s Case (AIR 1997 SC 3011) introduced detailed guidelines to address workplace harassment. In the UK, as early as 1978, Lord Denning, in the case of Ltd v Darby IRLR 27 [1978] observed that “the persistent and unwanted amorous advances by an employer to a female member of staff would amount to a fundamental breach of the implied term of mutual trust and confidence.”

The issue of harassment at workplace is also rampant in Pakistan. As per date collected by the International Labor Organization (ILO), Labor Force Participation Rate (LFPR), for men is 82.5% which is three times higher than women who are at a dismal rate of 24.8%.

To address this issue, The Protection Against Harassment of Women at the Workplace Act, 2010, [hereinafter ‘2010 Act’] was promulgated. After the promulgation of the 18th Constitutional Amendment, under which the Concurrent Legislative list was abolished, the Federal Act was replaced by the Provincial Act. On 16th October, 2018, the Sindh Cabinet approved the Sindh Protection Against Harassment of Women at Workplace Bill, 2018, however, the Bill has still not been passed. Therefore, the Federal 2010 Act, still holds the field. As per Section 7 of the 2010 Act, the respective governments have an obligation to appoint ombudsman at the Federal and Provincial levels. Moreover, as per Section 7 (2) of the 2010 Act, an Ombudsman can recruit staff to achieve the purpose of the Act and to ensure that the Act is implemented effectively.

As per Section 2 (h) of the 2010 Act Harassment is defined as, “any unwelcome sexual advance, request for sexual favors or other verbal or written communication or physical conduct of a sexual nature or sexually demeaning attitudes, causing interference with work performance or creating an intimidating, hostile or offensive work environment, or the attempt to punish the complainant for refusal to comply to such a request or is made a condition for employment”. It is important to note that Section 3 of the 2010 Act mandates that each workplace have an Inquiry Committee for harassment at the workplace and such a Committee shall consist of three members of which one must be a female as per Section 3 (2) of the 2010 Act. However, the 2010 Act is not being comprehensively implemented.

According to a Report submitted by the Sindh Ombudsman, 388 cases were filed, 350 have been disposed of and 38 are still pending. The incidents of harassment are widely prevalent; in the health department, education department, NGOs and also the private sector. If this issue is not immediately addressed, it would threaten the social fabric and the economy, and would undermine notions of Rule of Law and democracy.

In order to address the abovementioned matter, RCCHR is going to be filing a Constitutional Petition, before the Honourable High Court of Sindh, in order to achieve the effective implementation of the 2010 Act and to expedite the process of having an effective and implementable Provincial Act passed by the Province of Sindh.

The following documents are available to view online: