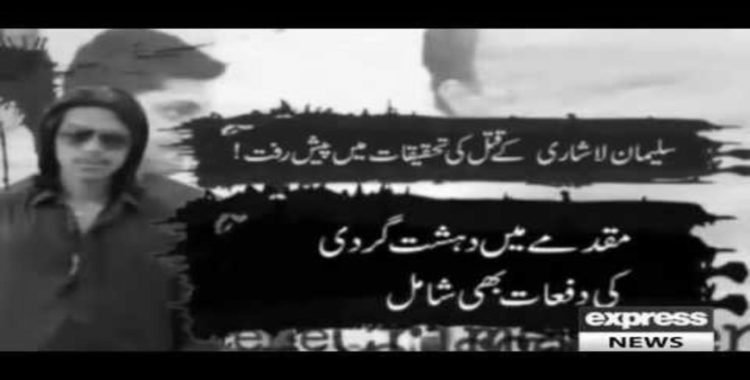 On 08.05.2014, an FIR was lodged on the Complaint of Mr. Zeeshan Mustafa against Mir Salman Abro, P.C. Rashid Ali Gujjar and four unknown assailant. The Complainant stated that on 08.05.2014, at 2am, he was sitting on the balcony of his house with his Mother, Mrs. Iram Naz, brother-in-law Raheemuddinn and their servant Raizat Ali, when all of a sudden a black colour Vigo, bearing vehicle no. CU-2900, stopped in front of his house. There were six people in the car and three of them carrying Kalashnikov got out of the car and started firing on the gate of the house and entered the house whereas, the other three stayed outside the house. The complainant later found out that one of them carrying Kalashnikov was Sulman Abro. Sulman Abro and his two unknown but identifiable accomplice injured complainant’s guard, Ali Ghulam Bhugti and Sulman Abro raising ‘Lalkara’ shot Suleman Lashari, 18 years old brother of the complainant, with the intention to kill him. The complainant and his guard also started firing in self-defense because of which Sulman Abro and his guard Zaheer Ahmed Rind, were injured. The complainant along with his mother took injured Suleman Lashari and Ali Ghulam Bughti to South City Hospital. However, Suleman Lashari succumbed to death due to firearm injuries at the hospital. The complainant later found out that Sulman Abro graud, Zaheer Ahmed Rind, also succumbed to death. The complainant also stated that his brother Suleman Lashari, informed him that few days ago Sulman Abro wrongfully crossed his car on sea view due to which harsh words were exchanged.

On the same day accused Sulman Abro, P.C. Rashid Ali Gujjar, P.C. Yasin Jamali, P.C. Imran Ali Arain and P.C. Maqbool Ahmed Brohi, were arrested in the abovementioned case. On 12.05.2014, the identification parade took place and the four unknown accused where identified by the complainant and the eyewitnesses, Mrs. Irum Naz, Mr. Rahimuddin and Mr. Riazat Ali. On 15.05.2014, the main accused Sulman Abro, identification parade took place in Ziauddin Hospital and the complainant and the eyewitnesses identified him. On 11.06.2014, the charge sheet was presented in the Court.

However, the accused persons in order to save their sink came up with a counter version. Mansoor Ali, cousin of Sulman Abro, on the same day of incident tried to register an FIR against the complainant, Zeeshan Mustafa, for causing firearm injury to Sulman Abro and death of PC Zaheer Ahmed Rindh. The police refused to register the said FIR due to lack of evidence and as a result Mansoor Ali, filed a petition under Section 22-A Cr.P.C. According to the petitioner he was sleeping, when he received the call from P.C. Rashid Ali Gujjar, informing him that Sulman Abro along with his father’s guards P.C. Rashid Ali Gujjar, P.C. Zaheer Ahmed Rind, P.C. Yasin Jamali, P.C. Imran Ali Arain and P.C. Maqbool Ahmed Brohi, went to meet his friend Sulman Lashari at his house. There he got involved in a quarrel with Sulman Lashari and Zeeshan Mustafa Lashari, who were armed with deadly weapon. Suleman Lashari and Zeeshan Mustafa Lashari along with their guard, Ali Ghulam Bhugti, asked Sulman Abro to stop his car (vigo) and then made a straight fire on his car. Sulman Abro and others tired to return to their car but Suleman Lashari and Zeeshan Mustafa Lashari along with their accomplice started firing due to which Sulman Abro and Zaheer Ahmed Rind received firearm injuries. P.C. Rashid Ali Gujjar drove injured Sulman Abro to the hospital, whereas, Zaheer Ahmed Rind was left behind in the injured condition and later succumbed to death. The petition was dismissed vide Order dated 10.05.2014, and the Petitioner Mansoor Ali, filed an Application before the Honourable High Court of Sindh, challenging the aforementioned order. On 26.09.2014, the Honourable High Court also dismissed the Application. The petitioner then filed an Appeal against the High Court Order dated: 26.09.2014 before the Honourable Supreme Court. However, the counsel for the petitioner did not press the petition and it was disposed off as withdrawn.

The ATC Case and the Appeal in Supreme Court are pending adjudication.